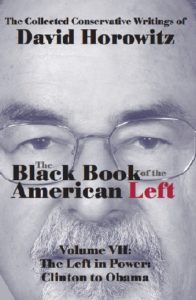 David Horowitz speaks about The Left in Power: From Clinton to Obama in Los Angeles California on December 14, 2016

The Left in Power: Clinton to Obama

This seventh volume of the Black Book of the American Left reviews the administrations of three presidents and the transformation of the Democratic Party from a party of the American center into a party of the political left. The magnitude of this change can be measured in the distance Democrats have traveled since the presidency of John F. Kennedy, once a liberal icon. The Kennedy policies—militant anti-Communism, hawkish defense, a capital gains tax cut and balanced budget—are now firmly identified with the Republican right. At the same time, Barack Obama’s Democrats are committed to the agendas of the left: income redistribution, socialized health schemes, and military retreat abroad.

Going into the  2016 elections, the views held by the Democratic leadership on national security were virtually indistinguishable from those of the Progressive Party, whose  1948 presidential campaign behind the candidacy of Henry Wallace defined itself by opposition to American “militarism” and rejection of the Cold War policies, which the Democratic Party was then pursuing against the Communist threat.
A salient but often resisted fact about this era is that progressives supported the Communist enemy in its conflicts with the United States. In other words, progressives worked as apologists, appeasers and enablers on behalf of a global movement openly dedicated to the destruction of their own country. Understanding this mentality is crucial to understanding the progressive political outlook and the movement that followed from it—specifically, the will to jettison America’s allegedly outdated constitutional structures,

and to cripple American power—all in the name of furthering economic equality and social justice.

The 1948 progressives failed to defeat Harry Truman or achieve their foreign policy objectives, and became marginal to the political dramas of the next decade. Then, in the 1960s, a younger generation of progressives created a political movement that described itself as a “New Left.” But while New Leftists developed an innovative rhetoric to distance themselves from their Communist forbears, they were in fact mobilized behind the same antiindividualist, anti-capitalist and anti-American agendas as the Communist movement from which they sprang.

As the Sixties progressed, the New Left became more and more overtly radical until, in 1968, activists staged a riot at the Democratic Party convention to destroy the candidacy of Hubert Humphrey over his support for an anti-Communist war. Following the convention debacle and Humphrey’s electoral defeat, New Left activists moved from the streets into the ranks of the party. With the support of the Democrats’ 1972 presidential candidate, George McGovern, who had begun in his political career in the 1948 Henry Wallace campaign, the New Left radicals were able to take commanding positions in the party’s congressional apparatus, and eventually in its national leadership.

As the activists acquired power, their aggressive tactics achieved a series of political victories: the betrayal of the Vietnamese and Cambodians by the “Watergate class” of congressional Democrats who cut off military and economic aid to the anti-Communist regimes; the appeasement of Communist insurgencies in Central America and obstruction of the Reagan administration’s anti-Communist policies such as support for the Contras; the betrayal of Iraq and sabotage of the war on terror; the thirty-year assault on the nation’s borders; the undermining of public health measures during the AIDS epidemic; the traducing of the civil rights movement and its transformation into a lobby for race-based policies and racial preferences; the subversion of the modern research university and the suborning of its liberal arts divisions into training centers for the Democratic Party and the radical cause; and finally the rise of a campus support movement for Islamists and anti-Semites. These victories—documented in previous volumes of the present series—culminated in the election of Barack Obama in 2009 and the institutionalizing of the policies of the left in government over the next 8 years.

President Obama was born, bred and trained in the progressive movement. His mentors were Communists and their progressive successors. On entering the Oval Office, he launched his administration with a global “apology tour,” conceding America’s “guilt” not only towards the Muslim world, but also towards surviving members of the Soviet bloc in Central America. The signature foreign policies of his administration were retreats from America’s battlefronts against Islamic terrorists in Afghanistan and Iraq; tepid and therefore ineffectual responses to terrorist forces in the Middle East; support for Palestinian terror regimes in the West Bank, Gaza and Egypt, this last under the Muslim

Brotherhood; and a major foreign policy effort to bring America’s mortal enemy, the Islamic Republic of Iran, into the community of nations, fund its terrorist regime and provide its leaders with a legitimized path to nuclear power.

Bill Clinton had been the first Democratic president with political roots in the so-called “antiwar” movement, although he himself was not an ideological leftist in the way his wife and political partner was. Accordingly, the opening chapter of this volume focuses on the views of Hillary Clinton and the cohort of leftists she brought to the White House. Leftists figured prominently in the Clinton entourage, and their agendas became prominent themes of an administration that eventually presided over the most massive breach of military security in American history—a story told in the last three chapters of Part I of this volume and now all but forgotten. This breach and the policies associated with it could not have been implemented if the political atmosphere had been confined to a few individuals, even as influential as Mrs. Clinton.

Important chapters in the Democrats’ defection from the bipartisanship which had characterized American foreign policy during the postwar years is told in other volumes of this series, in particular the essay “How the Left Undermined America’s Security Before 9/11,” which appears in Volume 3, The Great Betrayal. It describes the shift in Democratic Party attitudes on national security from the McGovern campaign through the Clinton years. Domestic effects of the progressive party line, which became a defining feature of Democratic politics over the next several decades, are analyzed in Volumes 5 and 6.

Just as the end of the Vietnam War created an opportunity for the progressive left to re-enter the Democratic Party after its break in 1948, so the Iraq War served as a political context for it to push the party towards more and more extreme agendas. The ground for

this development, described in Part 2 of the present volume, was laid in the demonization of George Bush and the Republicans, for staying the course in Iraq despite the Democrats’ defection from a war they had authorized. The part played by the left in this dramatic turn of Democratic policies was first described in my book Unholy Alliance (2004), which examined the still-poorly-understood events leading up to the invasion of Iraq and the growing sympathies of the political left for Islamist agendas.

The present volume occupies a climactic place in the Black Book series, which can be viewed as a running analysis of the movement that produced the Obama presidency, and has had such a traumatic impact on the American future. The outlook shaping
this movement is described in Part III, Chapter 3 of this volume, “Rules for Revolution,” which examines the political bible of the Obama left, Saul Alinsky’s Rules for Radicals. In its original pamphlet form, “Rules for Revolution” has been distributed and sold

to more than three million people, and is thus the most popular work I have written.

Because the selections for the present volume were made with an eye to describing this momentous transformation, merely topical pieces have been omitted and, consequently, it is not as complete a collection of my writings from those years as it might have been. As

in previous volumes, the selections have been edited and revised for readability, but the perspectives have been left unaltered. As previously mentioned, Volume 3 of this series, The Great Betrayal, provides a running account of the reversal and the Democrats’ unprecedented sabotage of an American war in progress. A third book, Party of Defeat (2008), co-authored with Ben Johnson, also deals with these events, and includes the essay “How the Left Undermined America’s Security Before 9/11.” In 2014 I published Take No Prisoners, which deals with some of the same subject matter from the perspective of political tactics that conservatives might use to confront the Democratic agendas. One chapter from that book, “How Obama Betrayed America,” is included in the present volume.

Volume VII
The Left in Power: Clinton to Obama

Introduction to The Left in Power      1

The Blood on Obama’s Hands

When conservatives consider the casualties of Obama’s national security policies, their attention is drawn quite naturally to Benghazi. In this shameful episode, the Obama administration sacrificed an ambassador and three American heroes to protect a deceptive presidential campaign message in which Obama claimed that the war against al-Qaeda was over and won.
The facts are these: Ambassador Chris Stevens and three American heroes were sent into an al-Qaeda stomping ground that the British and other diplomatic consulates had already evacuated; they were denied the security they requested; they were then left to die during a seven-hour firefight when their compound was attacked; and finally they were betrayed in death, when Obama and his representatives lied to the world about what had taken place and when he failed to bring their killers to justice as he had mendaciously promised he would.

— Read More of this excerpt from vol VII —