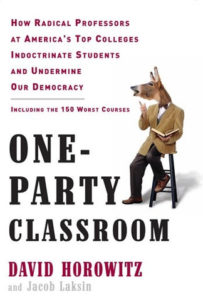 David Horowitz and coauthor Jacob Laksin take us inside twelve major universities where radical agendas have been institutionalized and scholarly standards abandoned. The schools they examine are not the easily avoided bottom of the barrel. Rather, they are an all-too-representative sampling of American higher education today.
Horowitz and Laksin have conducted the first comprehensive, in-depth, multiyear investigation of what is being taught in colleges and universities across the country–public to private, from large state schools to elite Ivy League institutions. They have systematically scrutinized course catalogs, reading lists, professors’ biographies, scholarly records, and the first-person testimonies of students, administrators, and faculty. Citing more than 150 specific courses, they reveal how academic standards have been violated and demonstrate beyond dispute that systematic indoctrination in radical politics is now an integral part of the liberal arts curriculum of America’s colleges. The extreme ideological cant that today’s students are being fed includes:

• Promoting Marxist approaches as keys to understanding human societies–with no mention of the bloody legacy of these doctrines and total collapse in the real world of the societies they created
• Instilling the idea that racism, brutally enforced by a “white male patriarchy” to oppress people of color and other marginalized groups, has been the organizing principle of American society throughout its history and into the present
• Requiring students to believe that gender is not a biological characteristic but a socially created aspect of human behavior designed by men to oppress women
• Persuading students that America and Israel are “imperialistic” and “racist” states and that the latter has no more right to exist than the South African regime in the days of apartheid

In page after shocking page, Horowitz and Laksin demonstrate that America’s colleges and universities are platforms for a virulent orthodoxy that threatens academic ideals and academic freedom. In place of scholarship and the dispassionate pursuit of truth that have long been the hallmarks of higher learning, the new militancy embraces activist zealotry and ideological fervor. In disturbingly large segments of today’s universities, students are no longer taught how to think but are told what to think.