Hating Whitey and Other Radical Pursuits 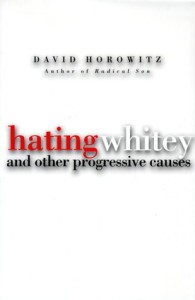 The anti-white racism of the Left remains one of the few taboo subjects in America. A former confidante of the Black Panthers and author of Radical Son, David Horowitz lays bare the liberal attack on “whiteness”—the latest battle in the war against American democracy. His passionate and candid account of contemporary racism reveals that the Cold War has come home.

Ideological hatred of whites is now a growth industry, boosted by “civil rights” activists and liberal academics. These once-youthful radicals, now entrenched in positions of power and influence, peddle a warmed-over version of the Marxist creed that supported the communist empire and excuses intolerance to the point of thuggery. Betraying the legacy of Martin Luther King, this alliance of black civil rights leaders and white radicals threatens to undermine America’s moral, political, and economic institutions.

Mr. Horowitz acknowledges that America’s unique political culture is the creation of white European males, primarily English and Christian. But these very men and their heirs have led the world in abolishing slavery and establishing the principles of ethnic and racial inclusion. Undeterred, so it seems, by America’s Anglo-Saxon pedigree, people of every race and creed still flock by the millions to these shores for a share of our unparalleled rights and opportunities. Yet, with staggering hypocrisy, a clique of racial warlords and academic malcontents indicts our every institution for racial oppression.

No stranger to ideological combat, Mr. Horowitz anticipates the standard charges of racism and sexism—wearisome bromides reflexively hurled at dissenters from the party line. Undaunted, he boldly grapples with contemporary racism in all its forms.