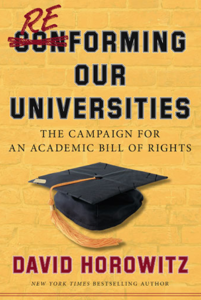 It’s no secret that our universities have become hotbeds of radical leftist thought. While professors and administrators pay lip-service to concepts like open-mindedness and robust debate, they try to squash any opinion that doesn’t match their radical left world view. Well, world-renowned campus activist David Horowitz wants to bring diversity back to the college campus! This Fall, he will launch a new book—and a new campaign—to shine the light on the college thought police.

In his new book, Reforming Our Universities, Horowitz will describe his decades-long campaign against intellectual bigotry, grade discrimination, and the denial of basic rights to any and all whose opinions diverge from the extreme liberal orthodoxy. And on college campuses across the country, Horowitz will launch an “Adopt a Dissenting Book” campaign, which urges professors to include conservative and pro-American books and resources as part of their overall curriculum. Reforming Our Universities will lay out his blueprint for reversing leftist indoctrination on campus though an Academic Bill of Rights. Horowitz’s reform is not a partisan call for universities to hire more conservatives, but rather a call for true academic freedom, where students as well as teachers are free to say what they think.