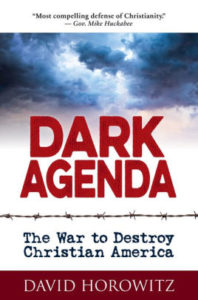 “One of the most intellectually compelling and rational defenses of Christianity’s role in America. A delightfully readable explanation of how Christian principles were the bedrock of the American Revolution, and how the anti-American left has targeted Christians because of that.”
—Mike Huckabee

“An eye-opening account of the left’s 60-year war against America’s Christian foundations. If you want to understand the political crisis our country is facing, read this book.”
—Gary Bauer, Former Reagan Undersecretary of  Education

In Dark Agenda, New York Times bestselling author David Horowitz exposes not only the progressive war against Christianity, but also a war against America and its founding principles, which are Christian in their origin. Dark Agenda is about an embattled religion, but most of all, it is about our imperiled nation. Tackling a broad range of issues from prayer in the schools to the globalist mindset, Horowitz traces the anti-Christian movement to its roots in communism. When the communist empire fell, progressives did not want to give up their utopian anti-God illusions, so instead they merely changed the name of their dream. Instead of “communism,” progressives have re-branded their movement as “social justice.” Dark Agenda shows how the progressives are prepared to use any means necessary to stifle their opponents who support the concepts of religious liberty that America was founded on, and how the battle to destroy Christianity is really the battle to destroy America.

In the video below, Freedom Center founder David Horowitz joins Mike Huckabee on his show to discuss his new book, Dark Agenda: The War to Destroy Christian America. Horowitz compares the arrogant and seductive Democrats to the serpent in the Garden of Eden.

In the new video below, Freedom Center founder David Horowitz joins Glenn Beck to discuss his new book, Dark Agenda: The War to Destroy Christian America, his radical socialist past, the Black Panthers, and why his ideological journey led him to a rightward evolution. Horowitz traces the history of Progressive attacks – by any means necessary – on Christian principles and on America itself.