Blitz: Trump Will Smash the Left and Win 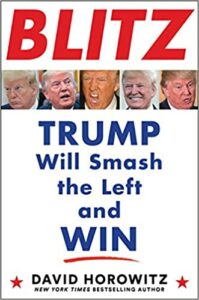 BLITZ reveals the attacks made against Trump have been the most brutal ever mounted against a sitting president of the United States. Blinded by deep-seated hatred of his person and his policies, the left even desperately tried to oust Trump in a failed impeachment bid. Horowitz shows that their very attacks—targeting a man whose mission has been to “Drain the Swamp” and “Make America Great Again” backfired, turning Trump himself into a near martyrwhile igniting the fervor of his “base.”

With the 2020 election upon us, New York Times bestselling author David Horowitz chronicles the brutal battles, bitter backlash, and leftwing lies Trump has faced as Democrats repeatedly try to sabotage his presidency. You’ll discover the left’s terrifying socialist and, in some cases, communist agendas as you’ve never seen them before. Trump’s response? In the meantime, he’s going to steamroll this opposition in November using the same playbook he has used to win before. In BLITZ you will find shocking revelations:

The effort to remove and destroy our duly elected President may be the greatest challenge America has faced since the Civil War, explains Horowitz. For the first time BLITZ exposes the left’s strategy to take down Trump, and how Trump not only beat them at their own game, but how he’s turning the tables on them to achieve a stunning reelection win come November.