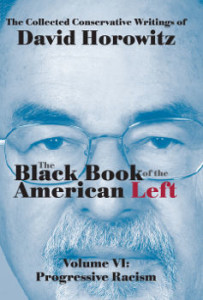 This is the sixth volume of my writings called The Black Book of the American Left. It is also one of the most important, as its subject—race—goes to the heart of the most problematic aspect of America’s history and heritage, and is thus the focus of the progressive assault on America and the American social contract. For obvious reasons, progressives have largely concentrated on one race in particular—American blacks, or “African-Americans” as they have come to be known through at least five permutations of political correctness in my lifetime: “coloreds,” “Negroes,” “blacks,” “persons of color” and—only then— “African-Americans.” The injustices of slavery and segregation and the historic sufferings of this community form a factual basis for the progressive indictment, which systematically ignores the historic gains—unprecedented and unparalleled—of this community because of America’s tolerant and liberating social contract.

The first essay in this volume, “The Reds and the Blacks,” explains how this indictment fits the left’s melodrama of “oppression” and “social justice,” and is merely an extension of Marx’s discredited formulas of “class oppression.” Parts I & II of the text that follows address the falling-away of the civil rights movement from the mission and values championed by Martin Luther King. An introduction, “Memories in Memphis,” is the account of my visit to the “National Civil Rights Museum” housed in the motel where King was murdered. This visit provided a summary moment in my efforts to understand these historic events. “Memories in Memphis” first appeared as the opening chapter in Hating Whitey and Other Progressive Causes. The original title of this book published in 1999 was “Hating White People Is a Politically Correct Idea.” This was an accurate description of the culture promoted by the new leaders of the civil rights movement, and—equally important—was the undeniable thrust of what was being taught in university curricula devoted to the malevolent race, gender and class “hierarchies,” which tenured leftists falsely claimed as structures of American society. The book was rejected by my publisher, Basic Books, whose editor told me, “We will never publish a book with that title.” His response indicated how completely the literary culture had succumbed to the new dispensation. I had to find an obscure publisher in Texas to get the book in print, and thus the upshot of trying to right an injustice was a dramatic diminishment of my career as an author.

Both essays, “The Red and the Black” and “Memories in Memphis,” were written in 1999, and the opening chapter of Part II, “The Race Card,” two years earlier. All the other chapters in this volume are organized in chronological order to form a running journal of the conflicts that followed the transformation of the civil rights cause. Until then it had been a movement to integrate African-Americans into America’s multi-ethnic democracy. In less than a decade it had become a movement led by demagogues to refashion racial grievances into a general assault on white people and on the country they were said to “dominate.” In its core agendas, the new civil rights movement was an assault on the basic American social contract, and in particular the 14th Amendment, with its commitment to equal rights under the law and thus to race-neutral standards and race-neutral governmental practices. Post-King civil rights became a movement to institutionalize racial preferences—the same kind of discriminatory practices that characterized segregation—and to recreate a race-conscious political culture in which blacks and a handful of designated minorities were singled out as the groups to be racially privileged. On other the side of the coin, whites were made targets of exclusion, suspicion and disapprobation.

Part III recounts an effort I undertook in the spring of 2001 to oppose a campaign by the left to gain reparations for slavery. This was a cause that had been first proposed in 1969, during the civil rights era, and rejected by every major civil rights organization. At the time of the proposal there were no slaves alive to receive reparations, while the vast majority of Americans who would be forced to pay reparations were descended from immigrants who had arrived in America well after slavery had been abolished. The clear goal of the radicals who launched the reparations campaign was to indict America as a racist society, and to sow the seeds of racial conflict. It was also an obvious shakedown effort of the kind that had come to characterize the civil rights leadership of Jesse Jackson and Al Sharpton. In the winter of 2001, I published an account of these battles titled Uncivil Wars: The Controversy Over Reparations for Slavery, which explained why the issue of race was at the heart of the left’s assault.

Democratic congressman John Conyers was the author of the legislative bill supported by the reparations movement. During the controversy, a Republican majority in the House of Representatives prevented Conyers’s legislation from being passed out of the Judiciary Committee and sent to the House floor, a fact that the left seized on to insinuate that Republicans were racists. Yet when Democrats won control of the House in 2008 and Conyers became chair of the Judiciary Committee under a newly elected African American president, he did not bring the reparations bill to the floor. The reparations issue, which had been infused with such moral urgency until then, was apparently no longer a priority and disappeared from public view. Few episodes seem better designed to illustrate how race had become a political weapon for a movement driven more by its anti-American and anti-white animus than a desire to correct actual injustices.

Part IV of this volume examines the way attacks on a chimerical “white supremacy” have fostered a new progressive racism whose consequences have been destructive for all citizens. The principal target of this racism is the idea of equal treatment under Introduction xix the law—the idea that informs the American identity and unites its diverse communities into a single nation.

As in previous volumes, I have edited the individual pieces to eliminate repetitions where possible and enhance the overall readability of the text.

Introduction to Progressive Racism: The Reds and the Blacks          1

What sets apart David Horowitz’s essays on race is the sparkling clarity he brings to a subject often dominated by emotion and muddled thinking. “The Black Book of the American Left” showcases the author’s deep knowledge of the civil rights era and its tragic aftermath – how calls for color-blindness morphed into demands for racial preferences and a civil rights movement became a racial grievance industry. Horowitz’s fearless honesty makes this book essential. His verve, wit and down-to-earth prose make it a pleasure to read, besides.

–Jason L. Riley, Wall Street Journal columnist and author of Please Stop Helping Us: How Liberals Make It Harder for Blacks to Succeed

David Horowitz provides a road map to guide us through the landmine of race. His clear, honest thinking enables Americans to rid themselves of the fog of political correctness and to see race clearly. This is an indispensable book.

Sometimes the easiest truths to understand are the hardest to actually learn. “Thinking doesn’t make it so,” is one. “Just because it feels good doesn’t mean it is good,” is another. The failure to learn this distinction is actually the cause of liberalism, and it lies at the heart of the liberal confusion about race.

The liberal view begins with adopting a morally correct tone, which is actually quite easy. All it involves is taking a correct stand against evils like racism. The liberal view then goes on to something like this: “Even though it’s hard to find an actual racist standing in a schoolhouse door anymore, and even though white people won’t admit it, there’s still a lot of racism in American society, and it’s an obstacle to the progress of black citizens.” There’s a corollary to this moral posture: The more racism you think there is, and the bigger the obstacle you think it presents, the more liberal you are. And the better you feel about yourself. You are the sensitive one. You are the one who can imagine yourself shoulder to shoulder with the civil rights soldiers of the past, who faced down police hoses in Alabama and lynch mobs in Mississippi. Detecting racism, even where it may not exist, heightens the sense of one’s own virtue and links one to the heroes of the past.

— Read More of this excerpt from vol VI —