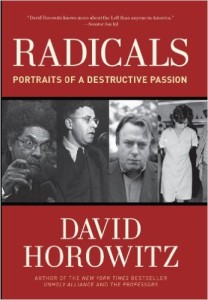 It is an irony of our human condition, writes David Horowitz, that the efforts by progressive radicals to make the world “a better place” have also been the chief source of human suffering from the beginning of time.

Bestselling author David Horowitz, once a radical himself, has now written Radicals: Portraits of a Destructive Passion—his ultimate reflection on radicalism and its inevitably tragic consequences, focusing his analysis not on abstract ideology but on the people who have embraced it.

Among those profiled in Radicals:

Incisive in its critique, and alternatively moving and devastating in its portraits of leading radicals, Horowitz’s book lays bare the roots of radicalism, how it is abetted by liberalism, and how liberals have utterly failed to learn from its repeated personal and political disasters.